Christina Alla and Michael Mudd’s dream tour of Italy was supposed to be more than just a hotel room.

But on Monday, five days into their trip, they both tested positive for COVID-19. Hours later, a medical team in hazmat-like medical suits drove them away from their hotel in Florence in an ambulance.

Now the North Texas couple, who is fully vaccinated, is waiting in a cramped hotel room in the mountain town of Montecatini Terme for word from Italian government or US embassy officials about what happens next.

“It feels like we’re imprisoned; there’s no other way I can describe it,” said Allala, a 33-year-old dentist from DeSoto. “We asked what would happen if we just left, and they said they would call the police.”

Allala said the couple’s calls to US consular offices in Italy went unanswered, and attempts to clarify their situation with Italian authorities were lost in translation or ignored.

Tourism-dependent countries like Italy and hundreds of other global destinations are anxiously awaiting the return of international travel after 21 months of pandemic downturn. Airlines and hotels planned big reopenings, only to hold back amid another surge in COVID-19 cases, such as the omicron variant that has swept the world this month.

Allala and Maud provide a cautionary tale about the predicament American tourists may find when traveling abroad. Negative tests, vaccines and face masks only do so much to protect against the spreading virus. Once abroad, tourists are at the mercy of the national governments in which they spend their holidays. Travel groups and airlines have called for more internationally standardized rules on testing, travel bans and quarantines, but COVID-19 is still being dealt with on a country-by-country basis.

Now American tourists have to make sure they are healthy to get back on planes back to the United States. The Centers for Disease Control and Prevention requires Americans and foreigners to test negative within one day of returning to the country.

“Unfortunately, it is very common for someone to contract COVID-19 while traveling, especially for people who have gone longer and on trips to see family,” said Sudeep Shah, travel agent and owner of Travel King in Plano. “The only thing we can really tell people is to find a hotel and stay there for 10 or 14 days. Try to find a hotel in a big city where you can deliver food.”

He said each country has its own rules on quarantine with COVID-19 infection. In the United States, for example, medical and travel authorities do not really track the status of travelers.

In some places, tourists have to cover their own hotel costs or stay in select hotels with other COVID-19 patients. In some places, Shah said, they are basically locked in their rooms.

However, millions of American tourists have taken the risk abroad, assuming that vaccinations will help mitigate exposure to COVID-19. Airlines and airports are keen to bring tourists abroad, too. In recent months, Turkish Airlines, Iberia Airlines and Finnair have announced new routes to Turkey, Spain and Finland from DFW International Airport.

Italy, one of the first countries to see a surge in COVID-19 cases in March of 2021, takes extreme measures when foreign tourists are diagnosed with COVID-19, forcing them into 10 days of government-sponsored quarantine.

In fact, the website of the US Embassy in Italy said the US Consulate General office in Florence was closed for “health and safety reasons”, and did not respond to a request for more information.

Allala is a dentist who put her hands in the mouths of hundreds of patients during the epidemic period without contracting the virus.

“We must have got it in Rome,” Allala said. “It’s the only place I can think of.”

Allala said she took a COVID-19 test at home on Monday after developing a cough and a runny nose. This result came back positive for both Allala and her boyfriend Mood, a 36-year-old automotive software salesman. They informed the hotel in Florence of their diagnosis.

A few hours later, Italian medical officials escorted Alla and Maud out of the hotel to an ambulance, which took them to a small hotel in Montecatini Terme, a city of 20,000 people east of Pisa known for its mineral springs and architecture. .

All they saw in the city was from the balcony of their hotel room.

“There are other people with COVID here,” Allala said. “I can hear it through the walls.”

Although their symptoms were mild, Alla and Maude still had a cough, congestion, headache, and an upset stomach. They did not have access to any medical treatment or even basic items such as cough drops and sports drinks for hydration.

The Italian government pays for the hotel and food, but the food they serve leaves much to be desired.

“The food is bad,” she said. “The best I can describe is cafeteria food, something that’s been frozen and then heated up and hung under a hot lamp for hours.”

The city does not have a grocery delivery service, but the local Burger King was able to deliver burgers, she said.

Allala has been pleading with restaurants serving five or six big cups of Powerade.

Their rooms are little more than a queen size bed and bathroom, although they do have a balcony. They begged the hotel to let them pay for a bigger room but they were refused.

“We couldn’t wash the clothes,” she said. “They told us to do it in the aquarium.”

Allala said an at-home COVID test, purchased at a local market, is the only verification that the couple has COVID-19. They are still waiting for an official PCR test. Quarantine should end 10 days after the day of the PCR test, followed by a negative test.

But Allala is not sure what will happen if she is not examined by Italian medical authorities.

They are scheduled to fly home on January 5.

“We haven’t canceled our flight home yet because we haven’t heard anything yet, and we don’t know what’s going on,” she said. “We’re just sitting here waiting.” 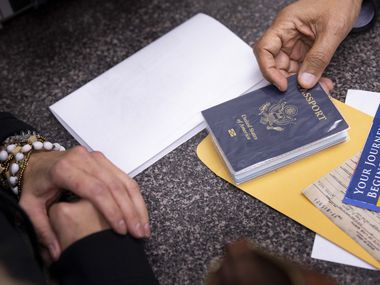